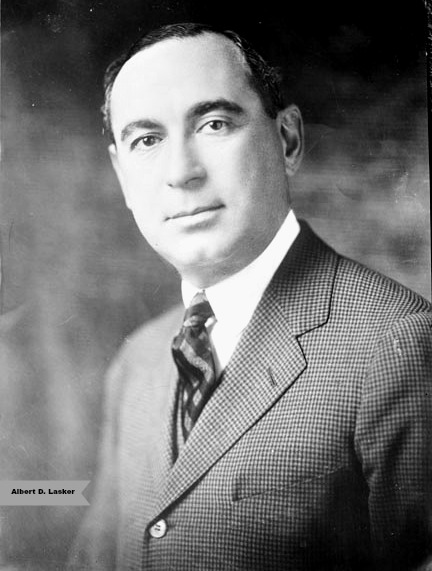 Albert Davis Lasker (May 1, 1880 – May 30, 1952) was an American businessman who played a major role in shaping modern advertising. He was raised in Galveston, Texas, where his father was the president of several banks. Moving to Chicago, he became a partner in the advertising firm of Lord & Thomas. He purchased and led many successful ad campaigns. He made new use of radio, changing popular culture and appealing to consumers’ psychology. A Republican, he designed new ways to advertise election campaigns, especially the Warren Harding campaign of 1920, and became a philanthropist.

When Lord retired in 1903, Lasker purchased his share and became a partner. He purchased the firm in 1912 at the age of 32.

Chicago, along with New York, was the center of the nation’s advertising industry. Lasker, known as the “father of modern advertising,” made Chicago his base 1898–1942. As head of the Lord and Thomas agency, Lasker devised a copywriting technique that appealed directly to the psychology of the consumer.

Lasker helped create America’s infatuation with orange juice. The citrus industry was in a slump, and California growers were producing so many oranges that they were cutting down trees in order to limit supply. At the time Lord & Thomas acquired the California orange grower’s growers account in 1908, Lasker was 28. He immediately got the approximately 2000 fiercely independent growers to unite under one label, Sunkist. He then created campaigns that not only encouraged consumers to eat oranges, but also to drink orange juice. He was able to increase consumption enough so that the growers stopped chopping down their groves. He is credited with nearly singlehandedly saving the California orange industry.

Lasker’s use of radio, particularly with his campaigns for Palmolive soap, Pepsodent toothpaste, Kotex products, and Lucky Strike cigarettes, not only revolutionized the advertising industry but also significantly changed popular culture.

Lasker had an inquiring mind about what advertising was and how it worked. In 1904 he met John E. Kennedy, a former Canadian mounted policeman who had entered advertising. Lasker believed that advertising was news, but Kennedy said, “news is a technique of presentation, but advertising is a very simple thing. I can give it to you in three words, it is ‘salesmanship in print'”.

The pair used this concept with the 1900 Washer Co. (later Whirlpool). Their campaign was so successful that, within four months of running the first ad, they attracted additional clients and their “advertising spend” went from $15,000 a year to $30,000 a month. Within six months, their firm was one of the three or four largest advertising agencies in the nation.

In 1908 Lasker recruited Claude C. Hopkins to the firm, specifically to work on the Van Camp Packaging Company (Van Camp’s) account. The relationship lasted for 17 years.

Among Lasker’s pioneering contributions was the introduction into public schools of classes that explained to young girls about puberty and menstruation (done to promote Kotex tampons). He is also credited as the creator of the soap opera genre, and using radio and television as media driven by advertising. 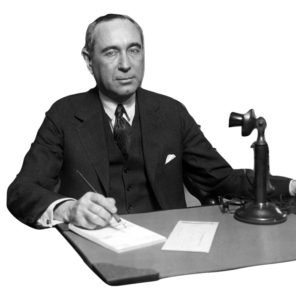 Products that include works
by Albert D. Lasker
(Click on Title for More Info): 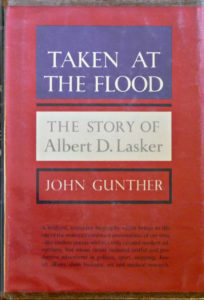 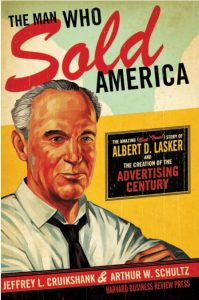