Advertising Age called him “the greatest mail-order copywriter of all time.”

Victor Opper Schwab was born on March 13, 1898 in Hoboken, New Jersey. Son of Albert James and Letitia (Irvine) Schwab. At the age of 19 he enrolled as a night student at Columbia University where he met Max Sackheim, then copy chief for a leading mail order ad agency, Ruthrauff & Ryan. Sackheim hired Schwab as his private secretary because he could take shorthand. However, his contributions to mail order ads, especially for the Dale Carnegie book, “How To Win Friends and Influence People” helped make it a best seller in the 1930s. That got Schwab promoted to copywriter where he became a research pioneer by using coded coupon ads to split test headlines, appeals, copy length, layouts and call to actions. He worked on the Charles Atlas and Sherwin Cody’s English Classics Course in addition to the Dale Carnegie book and others.

In 1926 he and a partner, Robert Beatty bought out Ruthrauff & Ryan and renamed it Schwab and Beatty where they went on to build the Book-of-the-Month Club into a giant in the book subscription industry.

In 1941, he wrote a series of five articles for Printers’ Ink and called them “How to Write a Good Advertisement.” They featured his five-step copywriting formula:

This series was later made into a book with the same title and adding the subtitle: “A short course in copywriting.” 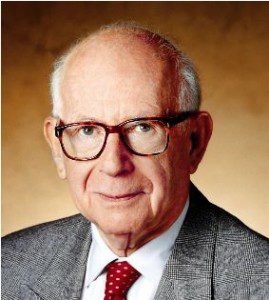