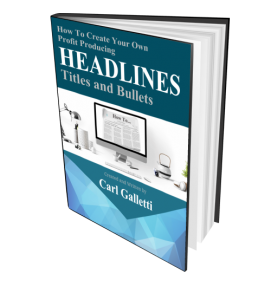 “On the average, five times as many people read the headline as read the body copy…

“Since headlines, more than anything else, decide the success or failure of an advertisement, the silliest thing of all is to run an ad without any headline at all — ‘a headless wonder'”

So it makes sense to learn how to write headlines that are good, very good, or great. This book shows you how in a quick and easy way.

Most successful authors are aware that their titles are the publishing industry’s version of the headline of an ad. Some titles, like Dale Carnegie’s “How To Win Friends and Influence People,” are so good they are used as the headline for the ad promoting the book. That must have worked because that book has been selling well for the past 85 years.

Here is an example of a single bullet:

By putting a bunch of bullets into your ads you have an effective way to attract attention to what you are selling.

I’ve been accused of being one of the best “bullet” writers in the world. I don’t know if that is true but in this book, I describe the unique method I’ve developed to create them. It works very well for me and others have told me it works well for them, too. Will your results be just as good? I don’t know. Maybe you should get this book and find out for yourself.