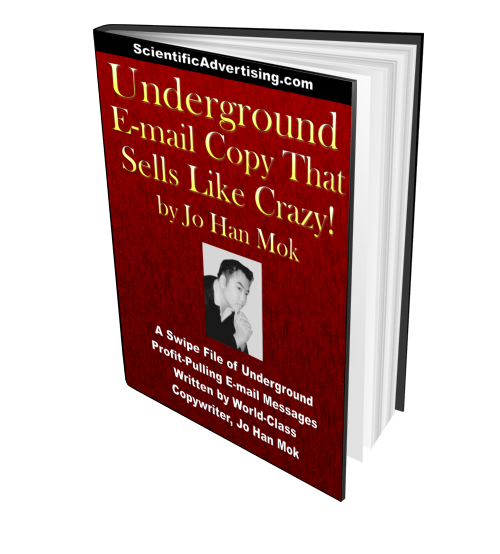 Jo Han Mok sharing a quizzical moment with his mentor and co-author of the E-Code, Dr Joe “Mr Fire” Vitale!

Who Is Jo Han Mok?

Jo Han Mok is a 25-year-old dude from Singapore who is a frequent guest and featured speaker at Internet Marketing bootcamps and conferences on subjects such as copywriting and Joint Venture Marketing.

He specializes in showing you ‘simple but unorthodox shortcuts‘ that you can apply to your marketing immediately to explode your sales and income now!

This is street-level stuff that you will NOT find in books.

‘Jo Han is a marketing genius! He created ad-copy for me that literally made my
business boom OVERNIGHT!”

Jo Han is also known for his ability to write six-figure pulling copy that hits prospects directly between the eyes and is paid as high as $20,000 to write a single sales letter Just one of his sales letters grossed 6 figures in less than 4 weeks and more importantly, he has successfully imparted his copywriting system to many others.

“We were personally shocked after doing an infomercial with Jo Han. He has
applied all our secrets of Making Money In Your Underwear and taken it almost
to the nth degree! This guy has an uncanny understanding of human behavior,
and we are impressed with his killer copywriting skills, joint venture techniques
and all other areas of marketing intelligence. Jo Han is an Internet Marketer we’ll
give two thumbs up!’

He is a sought-after Internet Marketing consultant and has co-created highly successful books and info-products including the Killer Web Copy software, Proof that Hypnotic Marketing Works, and his latest book, co-authored with Dr. Joe ‘Mr. Fire’ Vitale is the E-Code: “47 Surprising Ways To Make Money Online. Almost Instantly!”

“Jo Han is the KING of Joint Ventures! He has nailed the art of Joint Venturing into the most profitable science to be applied to Internet Marketing. Don’t even think of doing a Joint Venture without listening to what Jo Han has to say!”