Author of many books, subject of others

“The first book I ever read about advertising was David Ogilvy’s ‘Confessions of an Advertising Man.’ It set the stage for my subsequent obsession with finding out everything I could about how to get results through words. Ogilvy made it both interesting and exciting, as well as informative and logical. He is definitely the pied piper leader of the advertising industry. Read everything he wrote. It represents a unique wisdom you’re unlikely to encounter anywhere else.“

David Ogilvy was considered the “father of advertising” and a creative genius by many of the biggest global brands. First published in 1963, his Confessions of an Advertising Man revolutionized the world of advertising and became a bible for the 1960s ad generation. It also became an international bestseller, translated into 14 languages.

In 1983 he published Ogilvy On Advertising and again revolutionized the world of adverting, solidifying his role of king of the advertising world. Ogivly recognized the genius of copywriters like Claude C. Hopkins and was very much the modern day version of Albert D. Lasker.

His autobiography, “Blood, Brains, & Beer” is an interesting and insightful read about his life and the his collected works, “The Unpublished David Ogilvy” is a great testament to his genius.

David Ogilvy, CBE, (1911–1999) is often described as the “father of advertising.” He founded New York agency Ogilvy & Mather in 1948, and his iconic campaigns include legendary adverts for Dove, Hathaway, Rolls Royce, and Guinness. Ogilvy’s best-selling book Confessions of an Advertising Man is still one of the most popular books on advertising. 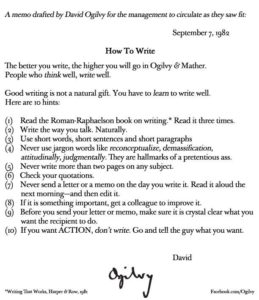