by Herbert Watson, The System Company

The Little-Known Copy-Writing Library That Turned a Shy and Retiring ROBERT COLLIER Into One of the Most Powerful and Effective
Copy Writers of All Time!!!

Here I was at the United Nations for a luncheon engagement.

I had just been invited to join The Magnificent Seven, a rather elite group of advertising writers — or copywriters as we call ourselves.

Milt Pierce, a fellow copywriter who writes for Direct Marketing magazine, yanked at my sleeve, “Hey, isn’t that Steven Spielberg?” “Yeah it is,” he answered before I could render an opinion. “What’s he doing here?  Scouting the location for a movie?”  No one knew for sure. We just sat down at our table and began our meeting.

When it got to my turn to introduce myself as a new member, the subject of Robert Collier came up and I guess I said something to the effect that he was one of the best sales copy writers there ever was. No one argued otherwise.

That’s when I met Robert Collier’s cousin. Marybeth came up to me after the lunch and introduced herself. She confessed that she was related. Unfortunately, when Collier was alive she was too young to get any copywriting advice from him but she did remember that he was kind of a shy fellow, even at family gatherings, and pretty much stayed in the background.

How did such a person get to be one of the most powerful sales copy writers of all time?

Those three books were so powerful in relating the knowledge of how to write effective sales copy that even a shy and retiring Robert Collier, by applying the principles he learned from them, was able to scale the heights of fame and fortune in the direct mail/mail order business.

Those three books made him a legend in his own time. And today his reputation is bigger than ever, more than sixty-five years after his death.

I had to have those three books. Thus began one of the most interesting searches of my life. I won’t get into the details here. It would fill a book. Let’s just say that after searching thousands of book shelves throughout the country, I was finally able to locate what I thought might be the only surviving copies of the books.

I read each and every word of each and every one of the three books, savoring the new insights being revealed. When I finished, I had to sit back and try to integrate the vast store of knowledge I had just absorbed.

This book, How To Write Letters That Win, is the first of the three that I got my hands on. I devoured it and learned a lot.

Then I began to use what I had just learned. Immediately I saw the results of my new found knowledge.

Since then my copy has gone on to sell millions of dollars worth of products and services. I give a lot of credit to this book for much of what I learned in those days and it still serves me in the copy I write for use on the Internet.

Anyone who wants to write the words that make people buy should read this book.

This book is called “How To Write LETTERS That Win” but it could have just as easily been called “How To Write Copy That Gets Results.” Whatever you’re writing, whether it’s a sales page for the web, a direct response letter, a magazine ad, a newspaper ad, a TV commercial…whatever has words that need to sell…this book will serve you well.

Here are some of the things you will learn: 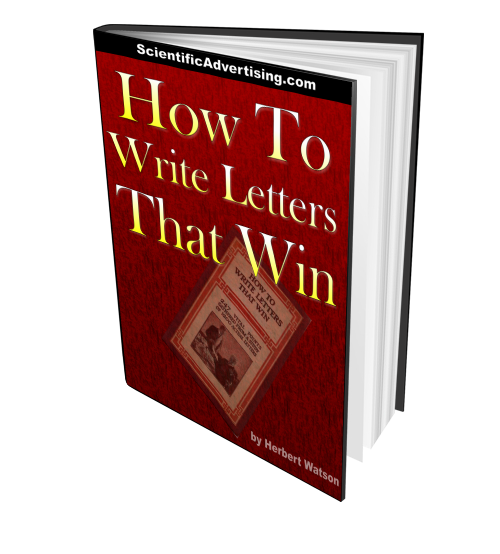